Did you know there are over 15+ different species of fish in Lake Chelan? And some of them are more challenging to catch than others. After several unsuccessful fishing trips out on the lake, my dad and I enlisted the help of local guide, Joe Heinlen, from Lake Chelan Adventures to take us out and educate us on how to fish Lake Chelan and hopefully land some big fish.

Our trip was full of excitement right from the start. My Dad and I arrived at Riverwalk Park promptly at 7:55AM for our 8 o’clock trip. As we descended on the boat launch, Joe exclaimed: “Who wants to catch the first fish, I got one right here!” True enough, there was a large rainbow trout right next to the boat and Joe was holding a fishing rod with a baited hook. “I want to catch it” I exclaimed and quickly jumped onto the boat with excitement! This was going to be the first fish I caught on Lake Chelan!

Joe instructed me to let the bait sink and wait for the fish to take the bait. As I eagerly watched the fish swim up to the bait with its mouth wide open ready to devour it, I gave the rod a swift jerk. Alas my nerves had gotten the best of me, and I Jerked just a second too early and the fish swam away. Not discouraged in the slightest, Joe explained that he had caught and released that fish several times awaiting our arrival, and that we would catch many more fish that day.

We proceeded to take off from the launch, and head out into the Lake in search of our next catch. As we were heading out to our designated fishing area for the day, Joe proceeded to give us some knowledge of his 20+ years of guiding on Lake Chelan and gave us instructions for when we got a fish on the line. After about 90 minutes of no activity, suddenly my pole started bobbing up and down viciously! I had a fish on the line! After releasing the downrigger, and around 10 minutes of fighting what seemed to be a monster fish. I landed our first catch of the day. It was a 5 lb. Mackinaw (Lake Trout). “This is the biggest fish I have ever caught” I exclaimed, but soon realized that it was indeed mediocre at best for what lies beneath the surface of the 3rd deepest lake in America.

After a few minutes, my dad had one on the line himself and the action seemed to pick up exponentially! One after another, Dad and I continued to land bigger and bigger fish consistently one-upping each other at every turn. Finally, Dad’s pole struck so hard and fast we thought we had a Chinook salmon on the line. Dad spent around 30 minutes fighting a monster fish attempting to make it into the boat. Finally, at the brink of exhaustion, we got the fish topside and Joe was able to grab it with the net! It was way bigger than either of us were expecting! At 3 feet long and 14.5 lbs. Dad proudly posed with his catch as the adrenaline from the battle began to subside.

At around 11:30 AM strong South West winds began to swirl around the lake and created large swells that forced us to call it a day. I had caught 4 fish and Dad had caught 3, and we began to reel in the lines and prepare to go back to shore. As we were bringing in the lines, Dad exclaimed suddenly “I think I got one” and sure enough he did! After fighting another ten minutes to land the fish in the boat during the storm, we were able to secure the lines and head to shore.

Once we made it to the launch, Joe was kind enough to filet all the fish and gave us several amazing recipes and instructions for grilling, brining and smoking our marvelous catch! We walked back to the car, arms loaded with many pounds of fish and quite the story to tell. We vowed to take the knowledge we had learned from our guide and implement them into our repertoire, so that we would have success on our next trip out on the lake.

No matter how many years of experience we thought we had, the knowledge we learned that day from our guide turned out to be priceless! Well worth the price of the trip! I highly recommend anyone looking to land the big ones on Lake Chelan book a trip with this guide and learn the feeding habits and locations around the lake. Choose Lake Chelan Adventures for your next trip. I’m glad I did! 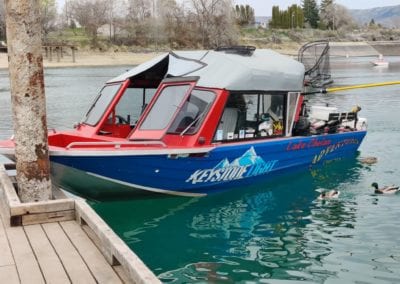 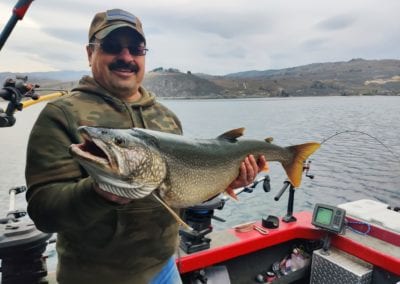 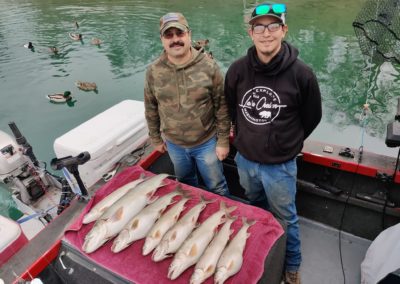 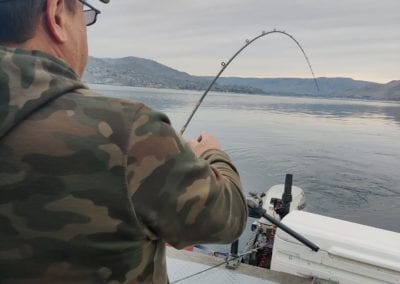 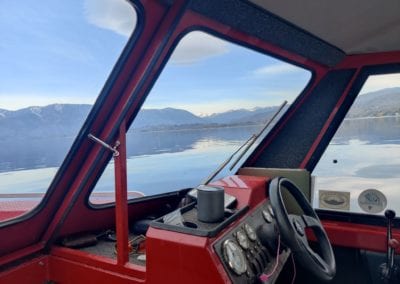 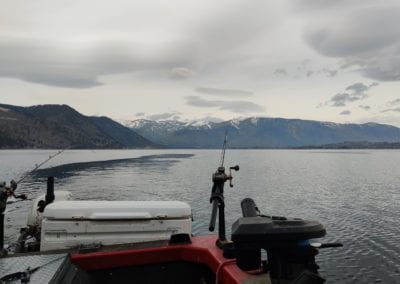 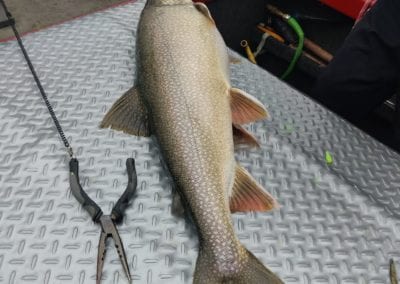 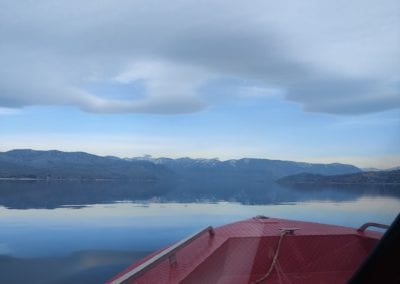